The 36th Assembly District falls entirely within the boundaries of San Bernardino County. Tom Lackey (R) has been the incumbent since 2014 when he took the seat back from Democrat Steve Fox. 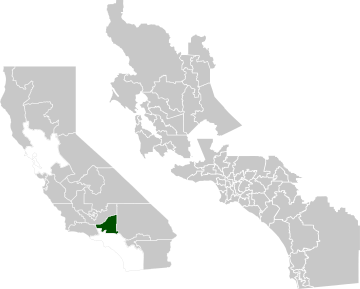 It is highly unusual to see a seat with this high of a registration gap for a party be held by the opposing party. We also saw Democrat Steve Fox make a comeback in 2016 in an effort to retake the seat that he once held. Here are the 2016 primary results:

59,075 ballots were cast in this race. 60% is a very high number considering overall registration and I conclude that NPP voters must also lean conservative here (similar to my AD 33 analysis). In November Lackey won by a margin of 52.1% to 47.9%

In 2020, Steve Fox is running yet again, in an effort to take back the seat. Democrats must be inclined to think that registration is in their favor because we saw seven of them jump into the primary. Here are the 2020 results:

This seat can be flipped back by the Democrats but the numbers look strong for Lackey.

We will now see a re-match between Steve Fox (D) and Tom Lackey (R). Lackey is the current incumbent and Fox used to be the incumbent.

Lackey has won two in a row against Fox and I see a trend here. I predict that Tom Lackey will win in a very close race.