The 77th Assembly District falls entirely within the boundaries of San Diego County. Brian Maienschein (D) is the incumbent in this race. Maienschein was a Republican up until after the 2018 election where he switched parties after narrowly winning re-election. 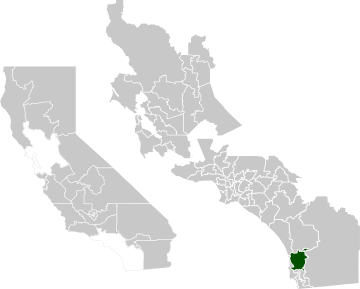 We saw a total of 112,823 ballots cast in the primary. Maienschein narrowly won in November by a margin of 50.2% to 49.8%. This might play a small role in why Maienschein decided to change parties.

This is similar to the Assembly seat where Chad Mayes changed parties after winning; however, Maienschein decided to become a Dem instead of an NPP. Here are the March 2020 results:

151,382 ballots were cast in this race. Ironically, the percentage for March was the exact same as AD 76.

We will now see a rematch between Brian Maienschein (D) and June Yang Cutter (R). Maienschein is the elected incumbent and Cutter is an attorney and small business owner.

Cutter is another strong candidate but I think Mainschein will win over Dems and some moderate Republicans. I predict that Brian Maienschein will win an extremely close race in November.